I’ve traveled to 44 of the states.  I’m missing Alaska (ahem), Hawaii, Maine, Vermont, New Hampshire and Delaware.  It’s funny, because a ton of my college friends live in Boston and I’ve visited them many times, but never made it north of Peabody, MA.

However, I’ve only camped in 12 states, which are shown on a map on the side of my fifth wheel.  So, when I was planning my route west I thought it’d be nice to drive roads I’d never traveled and camp in places I’d never camped in.  This thought led to a LOT of vacillation, as I planned routes that went through Canada, along the northern coast of Lake Superior, or routes south through Nebraska, Iowa, etc.

The horrible floods suffered in the Plains after the first bomb cyclone this year has pretty much ruled that route out.  Tons of campgrounds and roads are closed due to the flooding.  And the route through Canada would take a long time.  As tempting as it is, I’d like to get to Washington fairly quickly.  Whatever extra days I have before meeting people in Coeur d’Alene will be spent camping in my sister’s driveway in beautiful (?) Spangle, WA.  She’s the mayor, so I figure no one will mind.

Grain might not be your thing, but Spangle is part of the rolling hills of the Palouse region of southeastern Washington.  This is where they grow wheat, barley, etc. And I think there is certainly a beauty in the hills. 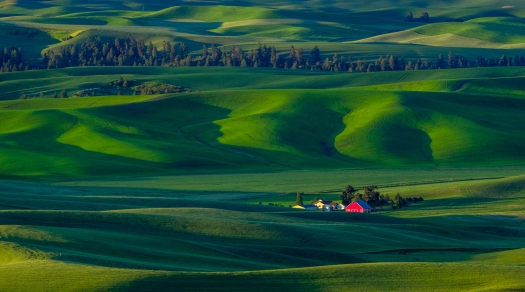 The next problem I had was when to leave.  Initially, I tried to make reservations for the Saturday night of Memorial Day weekend, but most of the campgrounds I contacted were requiring a 3 night minimum due to it being a holiday.  By pushing back my leave date to Sunday, I found a KOA in Gaylord, Michigan that would allow one night.  My next stop will come in the Upper Peninsula–a place I’ve never been to.  I’m a little nervous about driving over the 5 mile long Mighty Mac bridge, but the campground will be worth it.

Gulp, I have to drive over this thing?  Pulling a giant wall for the wind to grab? Yikes. I researched how many people have died plunging over this bridge (yes, I did).  Only 2.  One lady was going too fast in a Yugo and flipped over it after losing control.  The other guy was ruled a suicide.  I feel better about my odds of making it.

Here’s a picture of the site I’ve reserved:

Backs right up onto the water.  I decided I’d spend 2 days here.  The rest of the stops are all overnights.  And the distance between Spangle and my last stop in Montana is going to be a challenge, but it’s hard to justify spending one more night on the road in Idaho when Spangle is just a few more hours.  We’ll see if I make it.  I can always pull over and rest for a while before going on.  That’s the great thing about pulling your bed, kitchen and bathroom with you!!

Here’s the map of the route, taken from RV Trip Wizard.  This is a very helpful planning tool, and you can click on campgrounds and read reviews about them–something that is  almost essential.  You don’t want to spend a long day on the road only to pull into a campground with Deliverance banjos playing next to you.

May 28: stay in Manistique. Enjoy the UP.

So, with this route, I’ll be camping in only 2 new states to me: Michigan and North Dakota.  However, I’ll be driving along U.S. Highway 2 for much of it, which I’ve never driven.  And avoiding I-90, which I’ve driven back and forth many, many times.  I did decide to drop down to the freeway in North Dakota because I wanted to avoid Williston, ND.  This is a big oil area and I’ve heard the roads are a mess due to truck traffic.  I’d also prefer to cross the Rockies on the freeway, though I have little basis for this reasoning.

5 Replies to “From Indiana to Washington”