I mentioned yesterday that I had to leave Charlestown and head west to the Evansville area.  Eville doesn’t have a lot of options for camping, but I discovered a county park in Boonville (yes, Boonville) called Scales Lake a few years ago.  It has a campground with pull throughs and back in spots, and full hookups.  It’s a bit of an RV parking lot, as the sites are pretty tight, almost all just gravel with varying degrees of level to them, and in the summer its packed with families enjoying the lake, which has a nice beach and swim area.  I’ve stayed here 4 or 5 times now, and while it’s about 30 minutes from Deaconess, it’s an easy drive and I get to continue camping!

However, today was just not a good day for me.  And when you RV, these things happen.  You’re pulling 11,000 pounds (in my case) of a giant rectangle down a road at freeway speed.  Just over 13 feet tall and about 34 feet long.  It’s not always easy.

So, my first clue that today was going to be rough was when I went to shower…and no hot water came out.  I checked that I had my water heater on: I did.  On electric.  Turned it off, then on.  Nothing.  I went outside, turned on my propane tanks (I hadn’t used them for the trip to that point), went back in and turned on the water heater on propane.

I checked the fuse box, praying that was the answer.  Nope.  Opened up the water heater access point, but couldn’t see anything obviously wrong.  Crap.

So, I bucked up and took a very, very cold shower.  It was in the 30’s overnight.  It was not fun.  But, it’s not like I’ve never had to take a cold shower–I have tent camped in the past, after all.

Next, I went outside to hitch up.  It was very, very muddy from all the rain, but those clouds passed in the night and it was a beautiful, sunny day.  I got hitched up and started to pull the trailer forward to pick up all the leveling blocks I’d used, only to discover one of my trailer tires was literally at 1psi.  Flat as a pancake.

Ok, I’ve got an air compressor for a reason.  It runs off a 12 volt battery, so I had to pop my hood, hook it up to the passenger side battery (Rory has 2 batteries, one on each side) and run the long hose back to the tire.  The trailer tires need 80 psi in them.  That takes a while.  Especially when someone is impatient and keeps stopping the air flow to check the pressure.  40 psi, dang!  62, dang again.  73…getting closer….

Finally, it’s inflated and doesn’t seem to be leaking.  I get all the leveling blocks up, which takes a lot of reversing and pulling forward as I had the chocks positioned just so it was really difficult to get weight off of them.  This is when being alone really sucks.  If I had someone else with me, I could move the truck a tiny bit, they’d grab the chock and then tell me to move forward or backward to grab the next one.  Instead, I have to move it blindly, as I can’s see the chocks at all, then put on the emergency brake so nothing rocks, hop out of the truck, go see if I can move the chock, and then go get back in the truck and do it all over again.  Of course, there are lots of other great reasons to have a traveling partner besides chock removal (or placement when you arrive), but it’s definitely a time when I’m very jealous of not having someone with me.

Anyway, I’m finally done and hit the road.  No issues with the drive, except I had new shocks put on the truck while I was camping and they are definitely not dialed in.  They’re adjustable, but I have to crawl under the truck to change their setting.  I was hoping it’d be ok at the default setting, but my back says otherwise.  Lot’s of bouncing, which is a lot painful when it’s 11k pounds bouncing on your rear end.

Sadly, my challenges weren’t done once I got to my destination.  I pulled into my site, needed 2 levelers per tire on the driver side to get close and put down my front landing gear.  However, once I unhitched, I could not get the trailer to auto level without it raising the front end very high and even pulling the driver side landing gear off the ground!!  I hitched back up and repositioned the trailer, but the same thing happened.  I hitched back up 2 more times to change how far my landing gear went down and eventually gave the whole auto level up and manually extended the rear jacks.  It appears I need to recalibrate the whole system.  Well, not tonight.  I’m exhausted.

On a positive note, I have become much more comfortable hitching up the trailer by myself.  I’ve gotten lots of practice!  And, I had time to enjoy the beautiful Easter sunset today.  I put the picture at the top of the page, but just to enjoy it again, here it is: 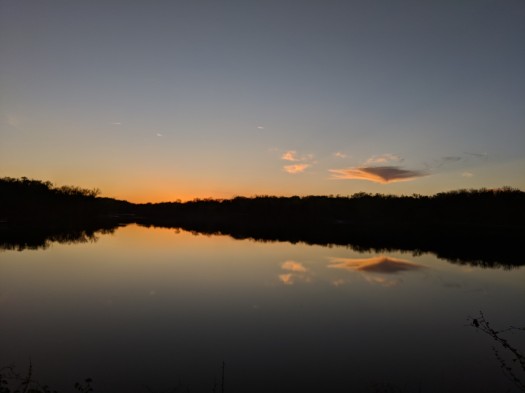 I hope everyone had a great Easter, and a much less challenging day than I did.  There’s a saying in the RV community that a bad day camping is still better than a good day working, and with the sunset above and now me sitting in my trailer listening to the frogs sing, I have to say that I agree!!

2 Replies to “A Bad Day RVing: Comes With the Territory”