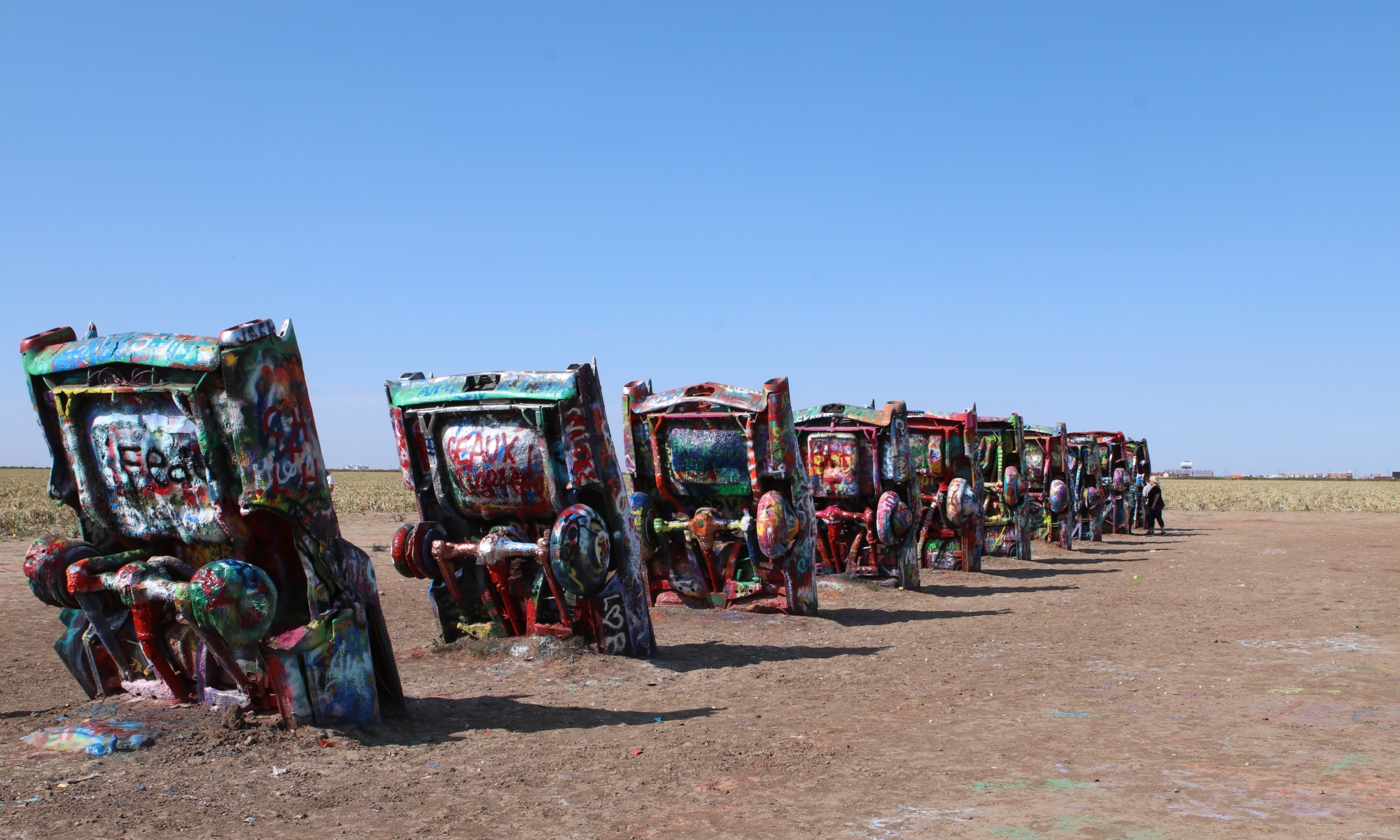 Our next stop on the trip was Amarillo, but not up from San Antone like the George Strait song croons. We took I-40 and headed to the Oasis RV Park just west of the town. Joe and Jan were just there for the night, while Jerry, Wendy and I were to stay 2 nights. The park was nearly all pull thrus, full hookups and pretty nice. I would stay here again for sure.

Night one after arriving was simply getting set up. Jerry and Wendy invited me to join them for dinner, so I cooked a package of brats I’d bought at Yoder’s Meat and Cheese in Shipshewana and Jerry grilled up some burgers. It was a nice dinner, sitting outside and chatting about the trip to come.

The next morning I spent doing a few errands. Most notably was finding a Great Clips and getting about 8 inches of hair chopped off. The tangles were driving me insane, and I just put it up in a bun anyway. Feeling much improved, I rejoined the Hammers and we set off to do some sight seeing. First stop was the Cadillac Ranch.

Cadillac Ranch is a piece of Route 66 history. Ten Cadillacs were buried in the ground belonging to a Texas billionaire named Stanley Marsh. It was completed in 1974, and there is no charge to see it. Visitors are encouraged to do whatever they like to the installation. Through the years, the majority of the spare parts of the cars have been stripped, but the basic outline of the classic caddy remains buried under layer after layer of spray paint.

I didn’t come unprepared. I brought a can of yellow paint to make my own impact on the famous landmark. I kind of wished I’d brought 2 cans, one to make a background and one for the words. But, it turned out ok in the end.

“I was here” is an homage to a Nightwish song, The Greatest Show on Earth. Riley, is for anyone who knows me at all, fairly obvious. Hope you’re all doing well back there!

After I finished spraying my messages, I gave the can to Jerry and then Wendy, who added their own touch to the Cadillacs. I have to say that Wendy was probably the best of the three of us in making her message readable. That woman has hidden talents!

Once we were done, I donated my spray paint to another visitor and we headed about an hour south and east, to Palo Duro Canyon. Palo Duro is the second largest canyon in the U.S. It’s a state park and offers camping, mountain biking, hiking, etc. I’d been looking forward to visiting for months after reading a little about it. My enthusiasm took a decided nosedive when one article from the spring discussed how wonderful it was to visit….save for the hundreds of TARANTULAS crawling about. Gulp.

However, I figured spring was different (mating season, good heavens…can you imagine?) and I decided I wouldn’t be caught off the road on foot or bike. I’m thankful I kept to this advice, as Jerry and Wendy decided to hike a trail and Wendy spotted one of the T words. No idea if she took a picture…she probably did, but is kind enough not to show it to me.

My time in Palo Duro was rather nice. There is a visitor center at the top of the canyon, then a steep drop into the canyon itself. It was hot and the sun/lighting wasn’t optimal, but it was quite impressive. The Hammers and I stopped at a picnic site for lunch and were inundated with flies. It was in the shade, and sitting there in the quiet of the canyon was a nice experience. After finishing, we parted ways and I found some spots for photos.

There were a lot of yucca and prickly pears. I loved seeing the prickly pear flowers, which I don’t think I’ve ever seen before.

There were a lot of mesquite and junipers as well, both well adapted to desert conditions. The photo above on the right is of a rock formation called the Capitol Peak.

I think our time in Amarillo was quite nice, albeit brief. I added a new state to the camping map, and if you’re ever in the area there’s quite a lot more to do; we just didn’t have time.

3 Replies to “Amarillo By Morning”