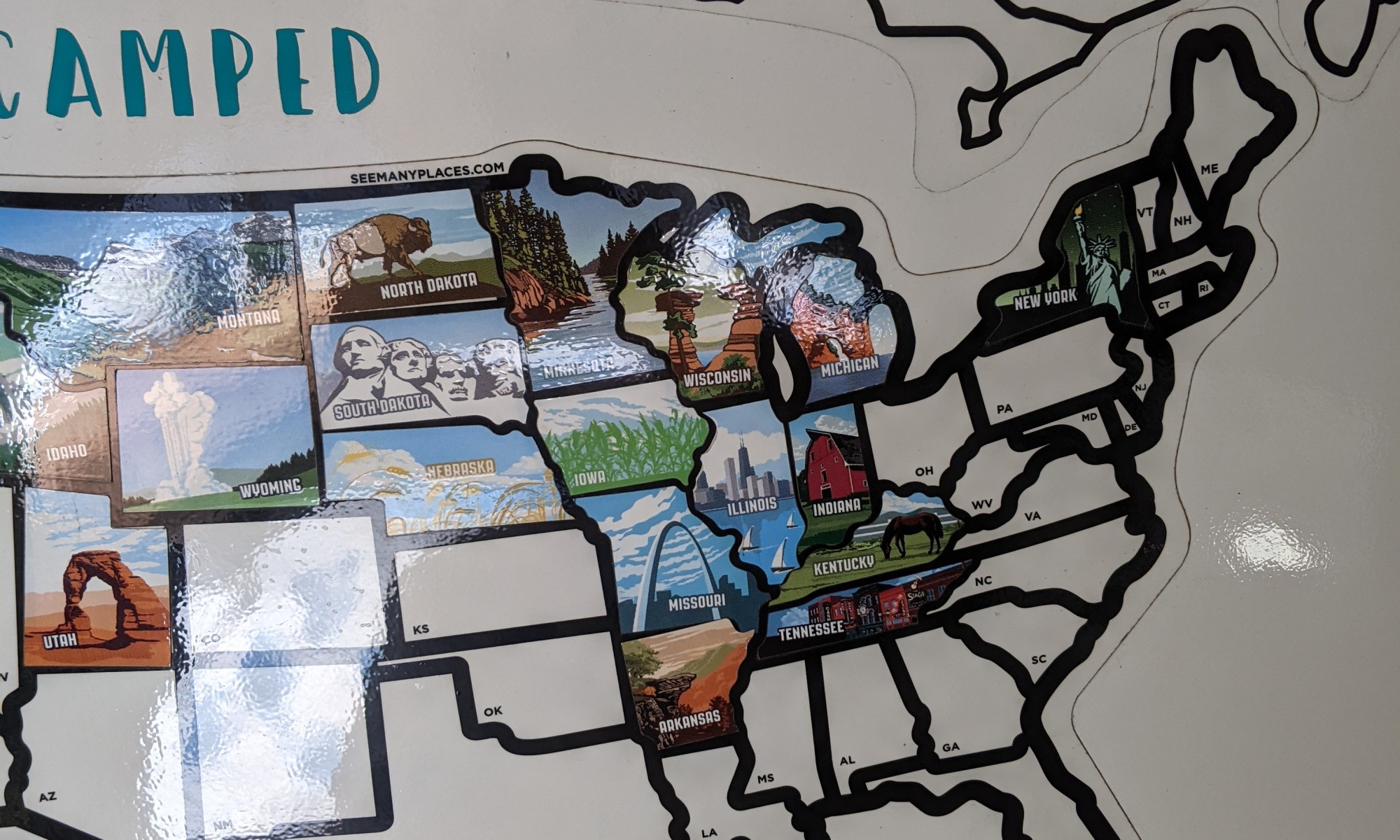 Day 2 on the road to the Balloon Fiesta found me driving down I-57 to I-55 to Memphis. Well, not technically Memphis. Instead, I hopped off exit 4 and drove south through West Memphis, Arkansas a few miles to an RV park I’ve always wanted to visit, Tom Sawyer.

I’ve heard a lot about this park. It sits over a levee and right on the banks of the great river. In the spring, floods are common. They have their bathrooms and laundry facilities built on wheels so they can move them. But, this was September. The flood gauge reading at the Memphis gate was -1. No flood concerns for my one night stay.

One totally awesome thing about this park is that it’s situated on I-40 as well. Which is the common interstate for many people heading out to the Southwest. As it happened, I was able to meet up with several from our group here: Randy and Mary F. from Kentucky and Joe and Jan S. from Alabama. Mary’s brother Orin and his wife Linda were also coming on the trip, so I met them as well. I was in doggo heaven, as Joe and Jan have Penny, the amazing Golden Retriever who went to Alaska with me. Randy and Mary have Remi, who I’ve met before, and a new German Shepherd they rescued from a shelter named Ty. And Orin and Linda have a Rhodesian Ridgeback named Willa May who loves being scratched. I had treats for them all, of course.

I was in a site next to the river and wished I could have spent more time watching barges moving up and down. I didn’t sleep well, however. At 2 in the morning I bolted up wide awake: I smelled smoke. I was absolutely convinced I was on fire, a life threatening emergency in the wooden box of an RV. I went running down to the main living area, but no flames or heat. Then, as I went upstairs again to the bedroom I smelled smoke quite strongly. It had to be the storage area beneath, which are called basements in fifth wheels. I turned on the lights outside and went boiling down the stairs, ready to grab a fire extinguisher and put out a blaze, hopefully. Throwing open the door—nothing. No flames, no smoke. I ran to the other side and same thing: nothing. It was then, standing outside in the middle of the night looking like a crazy woman, that I realized the ENTIRE air of the park smelled like smoke. Joe later told me he thought there was a nearby factory or pulp mill that made the air smell bad. Le sigh…..

Anyway, here are some awesome pics from my phone. I hadn’t dragged out my Canon at this point yet.

It was a short one night stay, and then on to Sallisaw, Oklahoma. I would love to come back someday and spend a few nights. Highly recommended if you’re looking for an RV site in the Memphis area.

One Reply to “The Mighty Mississippi”