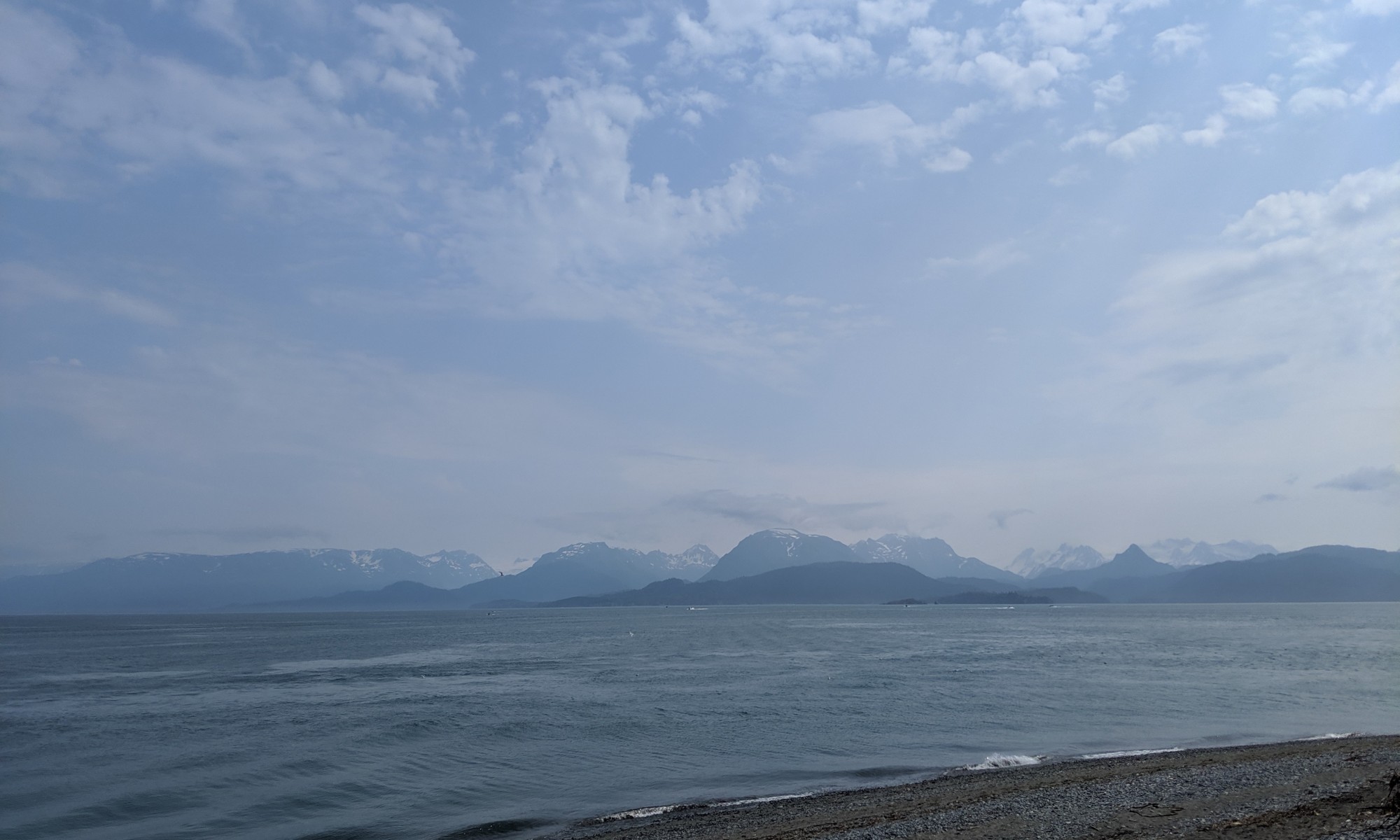 Twice in my life I’ve stayed in hotels/condos right on the beach (Atlantic and Gulf of Mexico).  When I lived in Lima, Peru I rented an apartment overlooking the Pacific.  Those were amazing experiences, but I have to say that waking up on a spit of land in the middle of Kachemak Bay was really, really cool.

Here is a map of the Kenai Peninsula.  You can appreciate why a forest fire near the road would be problematic for RV travel.

I got up and went kite flying for a bit, then my sister called.  They had slept well in their VRBO in Homer and were ready to come out to the Spit.  They picked me up and we drove down towards the end where the big marina is located, as well as a bunch of shops.

We ran into problems almost immediately trying to find a place to park.  It was literally impossible.  People crammed their cars, trucks and RVs into any spot they could find.  We were going to eat at one of the places along the road, but had to scuttle that idea when we circled the parking lots for far too long and without any success.  We drove to the very end of the road; there is a resort and restaurant called Land’s End there.  It looked a bit fussy from the outside, but we could park there, so we got out.  Inside, there was a ton of seating at the restaurant.  Our table overlooked the very last point of land of the spit; it was beautiful.  The food was very good too!

After finishing, we walked out their back door onto the wooden deck and down onto the beach.  There are a lot of very round rocks here; not sure if it’s from the constant wave action from Kachemak Bay or something else.  I picked up a couple of ones I thought were interesting to bring home.  A piece of Homer that I’ll have with me!

After lunch we were finally able to find some parking along the strip of stores near the harbor.  We wandered around quite happily checking out Native crafts and the crammed-full souvenir shops.  We all bought a few things and just enjoyed the views of the ocean and the people.  We also found a very delicious ice cream shop, which we had to try (of course).  Finished, they dropped me back off at my RV and headed back to their rental for a nap.

I’ve mentioned how many Bald Eagles were around; it’s a great place for them to get fish, after all.  I don’t know if it was the same eagle each time, but there was one that liked to perch on top of the lamp post in the RV park right in front of my site.  I didn’t have great lighting for the picture attempts, but I got this nice profile of him or her.

As evening approached, we had a fire out on the beach.  Quite a few people came out, including my sister, BIL and his mom.  Jeff made quite an impression at one point, falling over backwards in his chair.  Of course you could pick much worse places to fall than a beach full of sand.

We ended up roasting some marshmallows and laughing at Penny, who wanted to eat all the marshmallows she could get.  Which was probably more than Joe and Jan would have liked for her to have, lol.  It was a wonderful day spent in an amazing place with the best people!

*I know this blog is incredibly behind.  Real life is busy.  But I’m going to try and update when I can.  I have the pics mostly done, just have to get it all up on here.  Deepest apologies.