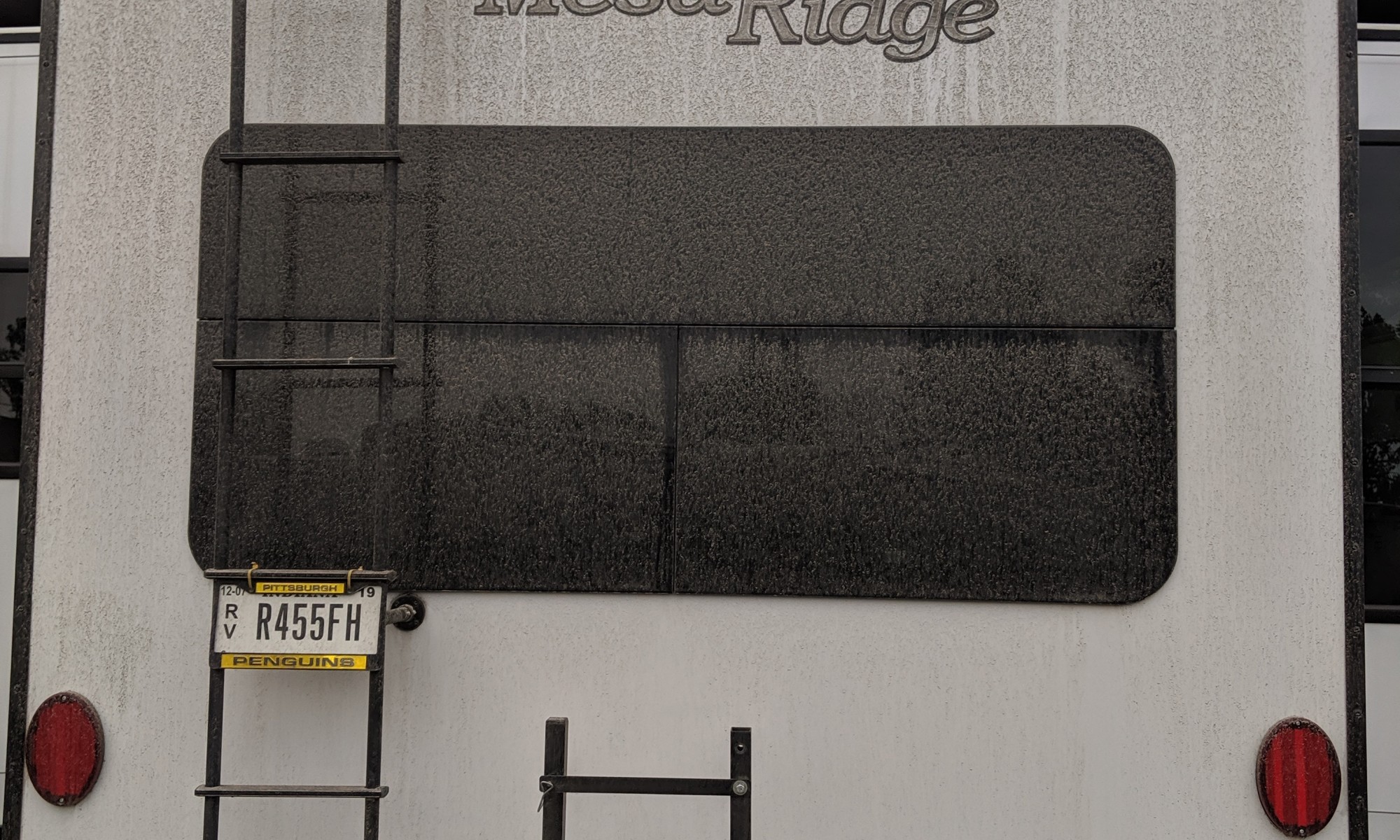 Up at 7am to get ready for the drive to Dawson Creek, British Columbia–the start of the Alaska Highway.  Unfortunately, the weather was no better.  Mid 30s and raining hard.  I sucked it up, though my fingers were numb by the time I was done.  And I was soaked through.  I changed my socks and we were ready to roll.  We were taking Alberta route 40, which is just south of Hinton.

I don’t like towing in rain.  Poor visibility, greater stopping distance, hydroplaning at speed; these are all sucky things that the rain provides.  But, I knew I shouldn’t complain as all of our other travel days had been so nice.

Then, I noticed that the rain was hitting the windshield with a splotching pattern, almost as if….is it SNOWING???

I radioed to Jerry who was in front of me, and he tried to convince me that it was “more like sleeting.”  But, I was suspicious, and when the landscape looked like the pic below, I deduced, like Hercule Poirot, that Jerry was wrong.

This made me even more nervous, but despite wishing at times that I was back in Indiana, there was nothing to do but go on.

I called Mo, who as Wagon Master is usually out first.  He said the snow stopped after about 70 miles.  We were at mile 40.  Great.  And, it turns out he was also wrong, though since we left later than him that likely explains the fact that we had snow for about 100 miles.

So, we kept driving hoping it’d get better.

I took it slow and tried to keep in Jerry’s tracks.  Thanks to he and Wendy for blazing the trail in front of me.  Eventually we came down off the elevation and got back to rain, and then as we neared British Columbia it dried up and we just had a stiff cross wind to deal with.  Piece of cake.

Arriving at the Mile Zero campground, I was given a pull through slot that was paved!  But the mud surrounding me didn’t help.  Rory and the trailer were absolutely filthy.

I was one of the very lucky ones, I learned.  Several people had taken rocks to their windshields and one guy hit a piece of metal in the road and blew out a trailer tire.  I got unhitched and was settling in when I got a phone call with devastating news.

I knew when I saw one of my colleagues was calling that something was up.  They’ve been really good about taking care of stuff without involving me.  I get texts and comments periodically from people saying they miss me (mutual!) but nothing more significant.  An actual phone call was unusual.  With trepidation, I answered.

I have a clinic in Evansville that we staff every month.  We see kids with CF there; there is a whole CF team separate from Riley.  Our respiratory therapist is Amy K.  She is one of the funniest, caring and genuine persons I’ve ever met.  She’s the kind of person you are comfortable with immediately.  I really loved working with her and getting to know her over the years I’ve been there.  She and her husband, Mike, are campers.  They have a fifth wheel, and she’s actually the person who told me about Scales Lake as an option to stay at in that area.

Mike, Amy and two of their kids went to Colorado this past week.  They were on a professionally guiding white water rafting trip wearing helmets, wetsuits and life vests.  The raft flipped.  Amy was swept downstream and despite a rapid response to rescue her, passed away.  I still can’t believe I won’t see her amazing smile again, or hear a crazy story from her about Jill, our nurse in clinic, or one of her kids.  I wish everyone had been able to know her, she was the kind of person that shines a light so much brighter than others.  She was forty three, but her impact on all who had the privilege of knowing her was far beyond her young age.  Rest in peace, my friend.