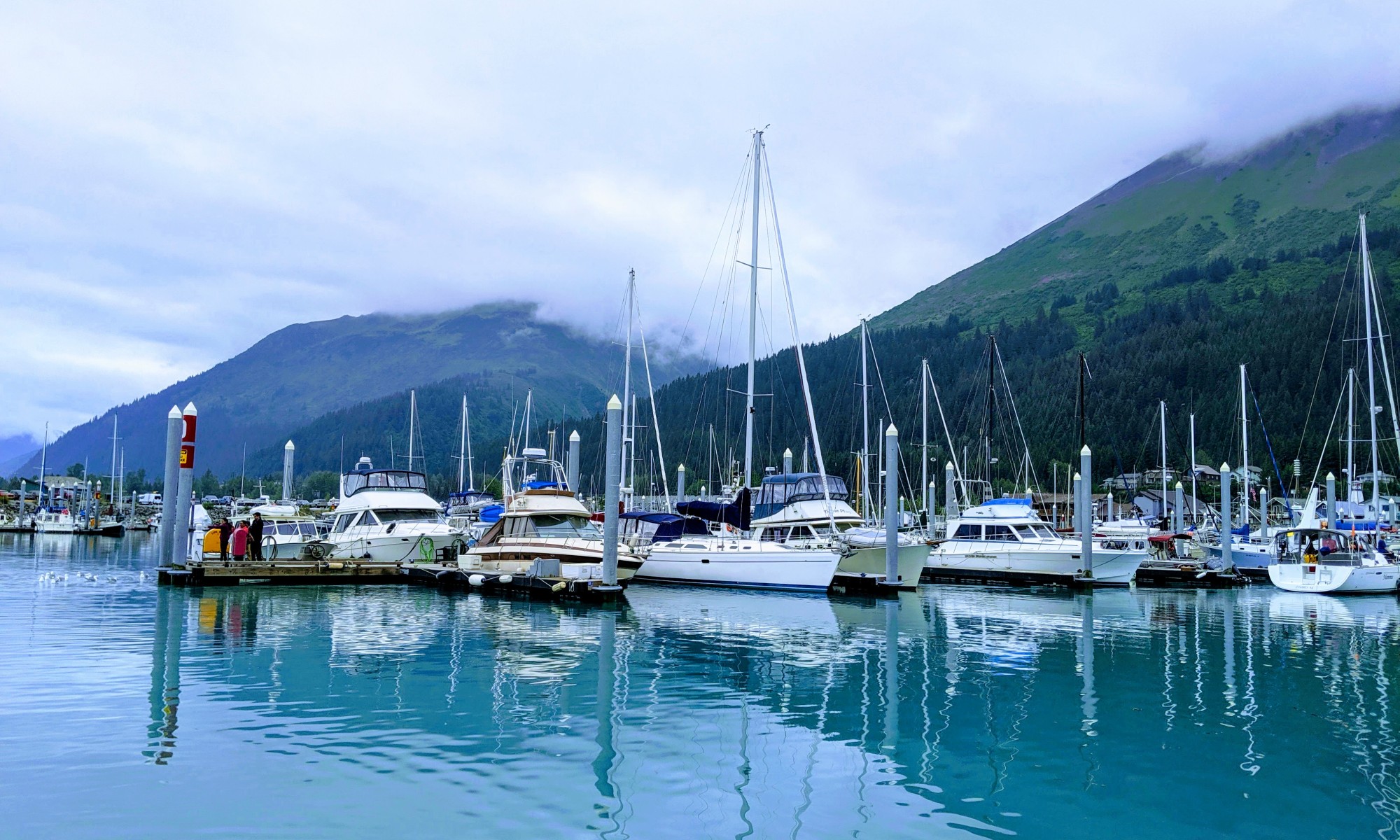 A couple of small buses took our group into Seward, where we wandered through a few gift shops while waiting for our boarding time for the Resurrection Bay cruise.  There are quite a few boats moored in Seward, and I spent some of my time wandering the dock and looking at them.

Our ship was named the Nunatak.  Unlike the cruise from Valdez, which was on a catamaran, the Nunatak was a vee-shaped hull.  This would mean more rocking if we got into rough seas.  I was very careful to get a seat on the lower level INSIDE the cabin.  I went outside quite a bit for pics, but with the overcast skies, the scenery wasn’t as amazing as it would have been on a sunny day. 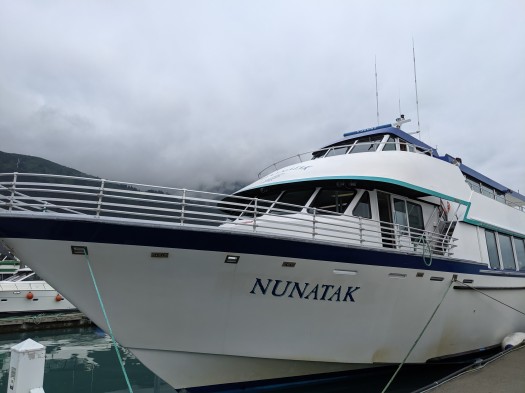 The company we were cruising with, Kenai Fjords Tours, takes you out to a place called Fox Island.  They have some cabins on this island, and some people were staying out there and doing thinks like sea kayaking.  We would disembark for about an hour or so, where we would be treated to a salmon and prime rib buffet for lunch.  Yes, please!

As we left the port, I shot some pictures of the surrounding scenery.  Sadly, every day we were in Seward was overcast.  It looks like it would be gorgeous on a sunny day, but I got what Mother Nature offered.  Clouds and grayness.

About 7 miles south of Seward, we came to a rocky outcropping of land.  This is Caines Head State recreation area.  During WWII, after the Japanese invaded the Aleutian Islands, there was great concern that Seward would be at risk.  It is an ice free port and the southern terminus of the Alaska Railroad.  Caines Head was picked as a nearly perfect defensive position to protect Seward from incoming attacks.  In July 1942 construction was begun on what was eventually named Fort McGilvray, completed in March 1943.  However, Navy advancement in the Pacific soon rendered the post unnecessary; it was abandoned in April 1944 and mostly dismantled March 1947.  The remains of concrete bunkers, the foundations of the battery guns and such are all still there, and a popular spot for hikers to seek out.  None of it was visible from our position in the sea, but I thought it was interesting.

Just past Caines Head, we came to Bear Glacier.  This glacier marks the beginning of the Kenai Fjords National park from the east.  While it appears from this shot that it’s a tidewater glacier–a glacier who ends in the sea, like Meares did near Valdez, it is not.  If you look closely at the area between the glacier and the ocean, you’ll see a dark line that has vegetation on it.  This is the terminal moraine of Bear Glacier, and it prevents the glacial ice from reaching the sea.  The dark stripe in the middle of the glacier is a medial moraine.  It kind of looks like a road, but is actually just rocks.

We motored on to Fox Island where we had a delicious meal.  I ate no meat besides the salmon.  It was a light year better than the chicken alfredo rice we got on the cruise out of Valdez, that’s for sure.

After lunch, we cruised around and got in some nice bird rookery visits.  Puffins and kittiwakes abounded.

As we cruised around, I caught sight of some of my peeps in the tour group taking an after lunch snooze.

We left the birds and struck out on a mission to find…what is that?

We watched the orcas for a good 40 minutes or more.  Then it was time to move on.  We visited more Stellar sea lions, who were doing what they do best: sun bathing and fighting.

It was less overcast on the way back, and I got a great shot of a bird in flight (kind of) and some of the coastal scenery as we neared the port once again.

One Reply to “Day Forty Six: a Cruise Around Resurrection Bay”