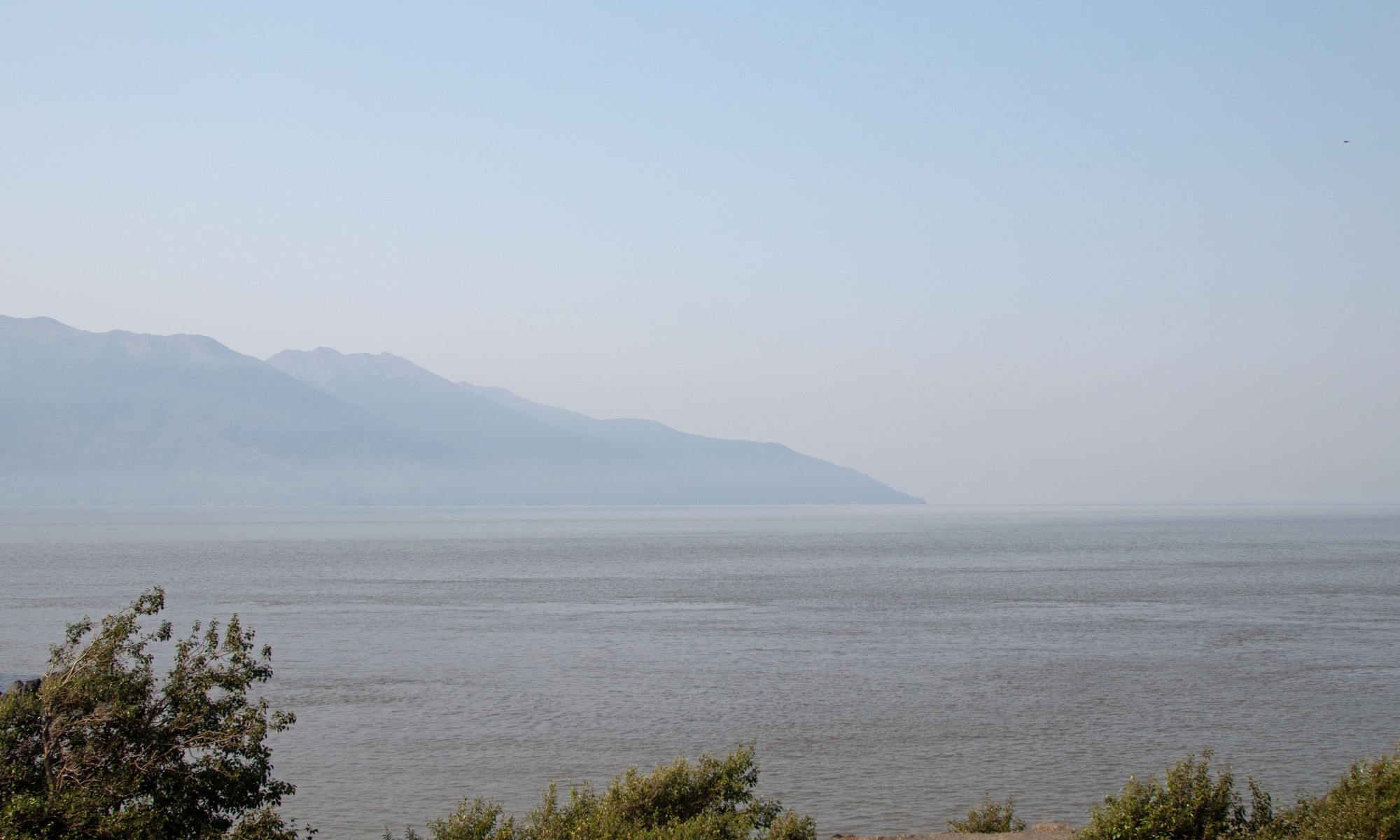 Before we get into this travel day, I want to apologize for any misunderstanding about my last post.  Today is August 12th; the Fantasy tour ended in Ferndale, WA on August 9th.  I’m currently in Spangle, but will soon have to leave to make my way back to Indiana.  I got way behind on the blog due to many factors that I’ve mentioned earlier, but in blog time we’re only at July 8th.  Each post is one day, even if I did next to nothing on that day.  There are LOTS of pictures and adventures still to be posted.  So stay tuned!

July 8th was our travel day from Palmer to Seward.  Seward is on the Kenai Peninsula, on an inlet called Resurrection Bay.  The name Resurrection came from a Russian ship captain, Alexandr Baranov, who was forced into the bay from the Gulf of Alaska during a bad storm.  When the weather finally calmed, it was Easter Sunday, so he named the bay and a river in honor of the day.

Seward itself is named for the former U.S. Secretary of State, William Seward.  Does anyone know what he did to get this honor?  I’ll explain in the next post if you don’t know the answer.

I was excited to drive the Kenai Peninsula, because of all I’d heard of its awesomeness.  Denise M., one of our amazing nurse practitioners in Evansville, was in Alaska with her husband some years ago and told me that the Kenai Peninsula was the most beautiful place she’d ever seen.  With a recommendation like that, who wouldn’t be excited?

Unfortunately, I did not have the same experience.  On June 5, 2019, lightning ignited a wildfire in the Kenai National Wildlife Refuge Wilderness.  Fires in Alaska are left alone unless they threaten a road or structures.  By the time we were to be driving through the area, the fire had grown to nearly 100,000 acres and the area around Cooper’s Landing and Soldotna had dense smoke.  There was haze basically all over the Kenai.

Now, I did stop at several places for pictures.  However, I can’t find them.  My suspicion and vague recollection was that I used one of my older camera bodies for these pictures as I had a longer lens on the new body.  The older bodies use compact flash cards, whereas the new one uses an SD card.  My laptop has an SD slot, but not a CF slot.  I had a card reader, but let Jerry and Wendy borrow it during the trip and I forgot to get it back from them when we parted ways.  I’m not going to spend the cash to get another card reader; I doubt the pics were that good, as the haze was intense.  If I get to them later and they’re decent, I’ll post them.  But this is what I’ve got.

These pictures are from the Turnagain Arm, and specifically Beluga Point.  I love the origin of the name for this inlet.  On Captain Cook’s third and final voyage to the Pacific, he was tasked with finding a water route that connected to the Missouri river–the fabled Northwest Passage.  However, nothing they investigated seemed to pan out.  Cook ordered his sailing master, William Bligh (yes, the Bligh that became famous for a mutiny against him years later) to investigate all the water ways coming off the Cook Inlet; the first (Knik Arm, which lies just north of present day Anchorage) indeed ended in a river.  Bligh was sure that the other inlet would end the same.  It did, and since they had to retreat once more, they called it Turnagain (turn again) Arm.  LOL.

One awesome thing about the Turnagain Arm (besides it’s name) is that it has a bore tide.  What is a bore tide?  I didn’t know until I traveled to the area what it was.  The second highest tides in North America (after the Bay of Fundy) occur here.  They can be up to 40 feet tall and come in so quickly that the leading edge forms a wave.  Here is a picture of one from the Turnagain Arm that is sourced from Wikipedia:

They warn people not to go down onto the beach at low tide; the sand can act like quicksand in places and every year people get stuck in them, only to have the tide roll over them and they drown.  Yikes!  I wanted to see a bore tide come in, but never managed it.  I will have some pics of the area that I took on my way back.

The drive itself was unremarkable in terms of the roads.  Our RV park was just outside of Seward.  Here’s a picture; luckily the worst of the smoke was gone from Seward.  We were going on a tour of a sea life center the next day, and I was told that Jerry and Wendy had finally gotten their rig fixed and were driving down from Glenallen.  They hoped to be there around midnight.  I thought that was amazing news, and went to bed ready to have a great day in the morning!

And one final note: I got a very nice email through the WordPress site from a special girl from T-town, Illinois.  I did try to answer you, but the email address is incorrect, or at least gmail can’t find it.  The email I tried to send bounced back.  Please add a comment or try the email thing again!!