I’m not going to survive until the end of this trip if today is any indication of what is to come.  While it is the third day of the tour, it’s the first day we traveled: from Coeur d’Alene to Fairmont Hot Springs, British Columbia.  And what a day it was.

I was up pretty early, eager to get going.  I knew I had to dump my tanks and a few other housekeeping things, like getting rid of all my produce.  Can’t take in fresh fruits or vegetables into Canada.

I was hooked up and ready by 8:30 or so, but waited for Jerry and Wendy to go before me.  They discourage us driving in large packs, but a few people in a grouping is ok.  We were asked to bring an FRS radio for communication.  As I left the RV park in Coeur d’Alene, I radioed to the tailgunners that Fantasy 11 (me) was off.  WHOOO.

Once we got through the congestion of the Coeur d’Alene and Hayden area, we had a great drive up U.S. 95.  We passed Lake Pend Oreille and the town of Bonners Ferry.

As we moved closer to the Canadian border, the mountains grew even more impressive.  There was a great scenic overlook just a few miles south of the border, and several of us pulled over to stretch our legs and take pictures.  It was quite the view!

The border crossing was at a teeny place called Eastport, Idaho.  Unfortunately, we hit quite a lot of back up here and waited for a good 30-40 minutes just to get up to the border agent’s booth.  I was asked very few questions and wished a great trip.  Piece of cake!  I wasn’t asked about produce, but he did ask about pepper spray.  When I said it was “clearly labeled bear spray” he didn’t say another word about it.

U.S. 95 now turned into B.C. 95 and miles turned to kilometers.  I set my speed to 100 and started the next section of the drive north.  What no one had told me was just how beautiful this are is.  The Canadian Rockies were soon in view, and I was in awe.  Every curve seemed to bring an even more incredible vista.  I think I drove most of the way with a silly grin on my face.  Perhaps a few times there might have been tears from the joy the scenery instilled in me.  Like I said in the beginning, if this is just the first leg, I’m not sure how much more wonder and beauty I can stand!

We got through Cranbrook, which is a town of about 25,000.  Continuing through, we eventually pulled into a rest area.  Jerry and Wendy were still in front, then me, then John and Sherry.  Joe and Jan came along not long after.  The pictures of the overlook of the Kootenay River were awesome, and I snapped several.  Just as we finished up, Steve and Terri S rolled in.  It was like a Fantasy reunion!

Pretty soon we were all heading up the steep hill to the RV resort.  I’m so glad Rory is a diesel, as he made it no sweat.  The kid who checked me in said I had site 205.  “You just back right in.”

In reality, it is the world’s easiest back in spot, as the road curves there into a huge paved area that has no sites.  However, with others backing in and coming through, the pressure was on and I failed.  My savior in the form of Jerry H. came down from his site and directed me in.  It took longer than I care to admit.  I’m too aggressive in turning Rory, so the trailer overreacts.  I definitely need to practice more.  But, eventually I was parked, up and running.

After fixing a quick dinner, I hopped in Rory and went to look at the scenery.  The clouds were dark and ominous to the south, so I headed north.  I went maybe 30 kilometers to some just awe inspiring views of Lake Windermere and the mountains before turning around and driving some kilometers south of the park to see Lake Columbia again. 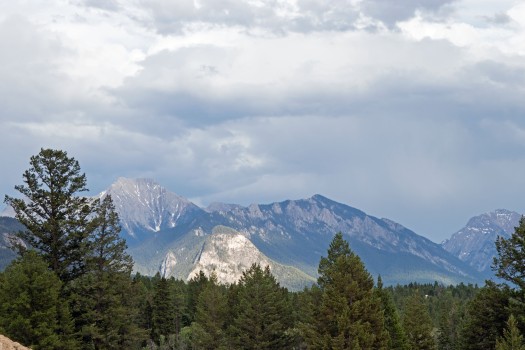 So, I’m in raptures.  I knew we’d have good scenery at points along the way, but I had no idea the first travel day would nearly do me in with the bliss of the truly amazing planet we inhabit.  On a sad note, Verizon limits me to 0.5GB of data per day in Canada.  I exceeded that nearly immediately.  This parks WiFi is nonexistent at my site; I’m sitting in a laundry room to get a signal.  I’m told it just gets worse from now on.  Therefore, I may not be able to update this blog as regularly as I’d hoped.  I’ll write pages for each day, but they may be bunched together when published.  Maybe it’ll be better in Alaska.

I’m off to Fort Steele with Jerry and Wendy this morning.  Hope you all enjoyed the pictures.