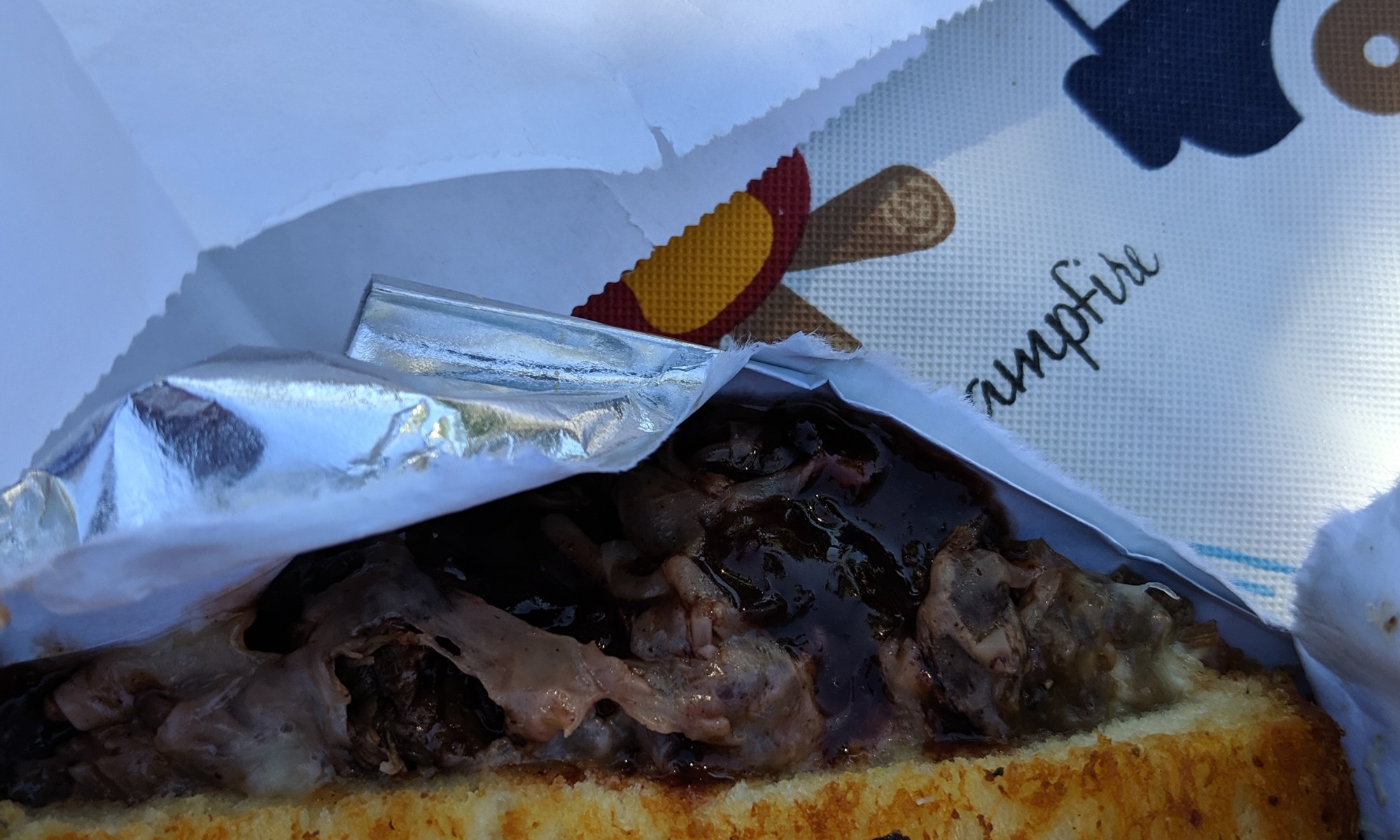 June 11th marked the official beginning of the Alaska tour.  We didn’t have anything scheduled until 4, so I got up and headed to Costco.  As is universal, I believe, for Costco, on a Tuesday morning the parking lot was filled and the line for gas/diesel was 3-4 vehicles deep.  Crazy.

I did find this somewhat unique to a Costco in Northern Idaho:

I don’t believe my Indianapolis location carries that product.

After unloading the groceries and other items that I just had to buy, I went to a local grocery for water and tea.  My next task was to find dry lube, so I found a Lowe’s.  Unfortunately, they didn’t have any.  Autozone had literally one bottle.  One of the guys, Jarhead, is going to help me dry lube my slide rollers.  The big slide is sticking badly and I’ve been afraid it’s going to break at some point.

After that it was lunch time!  Missy and Dave wanted me to eat at a place called Meltz which advertises “extreme” grilled cheese.  They love it so much they were willing to drive over from Spokane to pick it up and join me at the RV park.  That’s love!

I ordered a half of a grilled cheese with huckleberries, pulled pork, sauteed onions and horseradish on sourdough.  It was extremely messy and utterly delicious.  So freaking rich, I have no idea how anyone could eat a whole.

Dave had the same while Melissa had a Caprese.  Dave had their mac and cheese as well, which may set a record for cheesiness.

It was time to head to the meeting after we finished eating and chatting.  I didn’t take any pictures of the meeting, but will try to get some today when we have a trip log meeting.

Someone asked how many people are going.  Well, there’s 22 rigs altogether.  Nearly all of them are couples.  There is one man, Bill from Texas, traveling alone like me.  Apparently his wife basically wouldn’t come, so she’s at home.  There’s another man who is traveling with his 11 year old grandson.  He said he told Marshall that this wasn’t a vacation.  It’s an adventure!  Couldn’t agree more.

We had a little game to play that the wagonmasters put together to help break the ice.  Everyone had been asked to send in a little tidbit about themselves–something unusual that might set you apart.  They were all printed out and you had to go around asking people what their entry was.  I sent in that I lived in Peru for a short time.

However, one of the statements was “I’m a woman who owns my own chainsaw.”

I cannot tell you the number of people who thought that must be me!  For the record, I do not own my own chainsaw.  I’ve never used one, though I’ve seen my dad use one many times.  I don’t really have any need for a chainsaw, and would likely cut something vital off of me if I tried to use one.  It turned out that a lady from Bowling Green, KY had put that down.  She and her husband live on a large plot of land with a lot of trees.

As I found names to put to entries (Marshall’s was that he’s a really good drummer.  Jerry’s that he uses a robot to mow his lawn, etc), I showed my age a bit in a very ironic fashion.  Many of you know that I despair of the youngsters I work with not knowing any of the best musicians that ever lived: 80s bands.  Like Guns N Roses.  But when I saw the entry: ‘I moved Rare Earth in my GTO while in college’, I thought how weird it was that someone would use a GTO to move dirt around.  I wasn’t sure what kind of dirt Rare Earth would be, but thought it must be something fancy for someone’s garden and therefore paid well to move it to people’s houses.

Turns out that was not quite right.  Apparently Rare Earth was a band.  I honestly have never heard of them.  Let me tell you, Steve S. laughed his butt off when I told him I thought it had to do with dirt.

We ended the night with a group dinner and lots of conversation.  I headed to bed relatively early.  Wednesday is going to be busy as we do our final prep and have dinner at a floating restaurant.  Later, friends.

2 Replies to “Day Seventeen: And So It Begins”