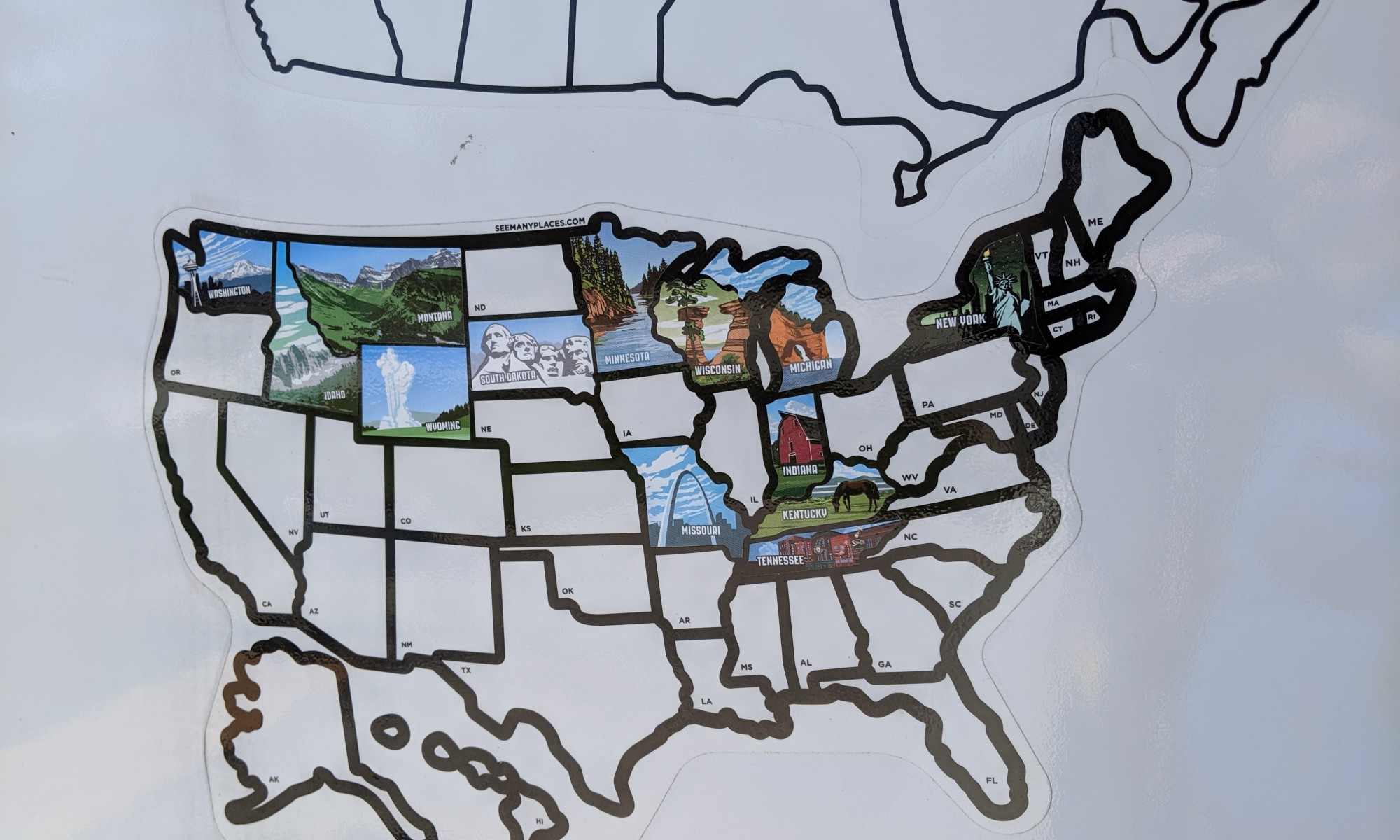 It was time to move on today.  I ended up taking much longer to get going than I should have.  Yesterday was busy, so I slept in til nearly 8.  I needed to dump my tanks and hadn’t refilled the diesel.  There’s a BP near the campground, so I headed there first.  However, they didn’t have diesel at the auto plaza–instead they had diesel only at the truck island.

I’ve been hoping to avoid fueling while towing, since I have such a large tank.  However, the drive to Gaylord on day one saw me with less than 60 miles til empty.  So, fueling at a truck island might be necessary.  But I’ve never done it and wasn’t keen on starting today, so I used Gas Buddy to find a cheaper station down the road.

Pulling up to it, however, again had no diesel at the car pumps.  Truck island only.  There were no semis there, so I decided to try it.  Now, I’ve actually watched videos on “how to fill up at a truck stop with your RV” and they always had you go in, pay for more than you think you’ll need, fill up with what you actually need, go back in and get the receipt.  I decided $50 would be more than enough.

I had told the lady I’d be back in when it stopped, but since it took $50 I didn’t want to go back and put more down.  The downside was I was only 3/4 full, and with a long drive to Minnesota in front of me I knew that wasn’t going to work.

So, I drove back to the BP and went to the truck island, made note of the pump, went in and asked for $35 on #21.  Walked back out, tried to get the diesel pump going and…nothing.  No button I pushed made anything happen.  Then, looking back at the store in despair, I realized there was another pump 21 across the way.  I was at the accessory pump (semis often have tanks on both sides) and you have to start the main pump to get the accessory pump going.  I hopped in the truck, made a u-turn and went to the main pump, which worked.  And Rory took all $35 from that pump too.  He was finally full, so back to the campground I went.

I realized I’d forgotten something important before I got hitched up: I needed to add Michigan to the map of states I’ve camped in.  Definitely a priority in terms of jobs.

By the time I dumped my tanks, hooked up and said goodbye to Lake Michigan, it was noon.  I wasn’t too upset, as I knew I was going to lose an hour.  So, off I went on U.S. 2.  I drove for literally hours in Michigan.  Having never been to the UP prior to this, I now feel like I’ve been all over it.  There was a brief moment I was in Wisconsin, but then it was back to Michigan again.

One nice thing Michigan does is that there are lots of little roadside parks along US2.  They are big enough for a truck to pull into.  About 3 hours into the drive, I swung into one that was empty except for me.  It was lovely weather, so I opened my bedroom window, stretched out and napped for about 30 minutes.  It was so quiet and peaceful; that stretch gets little traffic, and I thought how much I’d like to just stay there.

At this point, I was down to about a half tank of diesel, and at the next little town there was a Krist station with a set of diesel pumps.  It was an easy entry/exit per google maps, so I ended up stopping there and filled up.

Back on the road, I had another 3+hours until my next campground.  I drove through places with names like Iron River, Ironwood and Bessemer.  Finally, I crossed back into Wisconsin and began the long trek through the upper part of this state.

My destination was the Cloquet/Duluth KOA.  I knew that this campground was likely to be the sketchiest of the ones I’ll be staying at.  Per reviews, there were some issues.  However, I couldn’t really find much out there that seemed any better.

I finally pulled in after just over 7 hours of driving.  It was 7:15pm.  I got out, went to the office and found the inner doors locked tight despite the sign saying: hours: 8am-8pm.  Looking around, I had just noticed a brochure with my name on it taped to one side when an older woman walked in carrying a bag.  She tried to open the doors and found them locked, looked at me and asked how to get to the laundry.  I told her I’d just arrived and was getting my reservation.  She then peered outside to where Rory and the fifth wheel sat waiting and said: “that just makes me sick.”

At a loss, I tried to be gentle and understanding; yet I sort of wanted to know, so I asked, “Why?”

She became somewhat agitated in her movements and said “Toxic mold.  I’ve got Lyme disease and fibromyalgia.  So, I can’t use it.  It’s just sitting, and instead I have to live out of my van.”

She then abruptly turned and walked out, looking for the elusive laundry.  Now, I’ll share with you that I desperately need to do laundry and was fully planning on doing some tonight, but at that moment I decided I could probably find something to wear tomorrow and would wait until I get to Grand Forks.

I found my site on the map and pulled in.  They are dirt pads with a few scatterings of rocks to make you think there was gravel at some point.  It was pretty level, but the ground was soaked and every step outside off of the pad brings water soaking into the shoes.  I am right next to a ditch/culvert with standing water.  And the mosquitos, good night.  I think I have 246 bites at last count.*

After unhitching, I had to go to Walmart, which is blessedly close by.  I planned to get diesel and a few essentials.  As I drove out of the campground, 3 men who appear to be living in the campground while working (based on their trucks) stared at me until I was out of sight.  My plans for an early start just went up in priority.  I will say there are a few nice rigs here and a dad with his kids riding bikes around while I unhitched, so it’s not so sketchy that I won’t sleep here.  But you can bet I put my tonneau cover down to cover the truck bed and have all my shades drawn with the AC going.  This is not a place I’ll ever plan on coming back to.  Unlike my beloved place in Michigan, which I miss a whole lot right now.  Hoping that Grand Forks is way better.   Here are my parting views of the campground.  It was a beautiful, sunny day.

*number of bites just an estimate. There well may be more.  Or less.